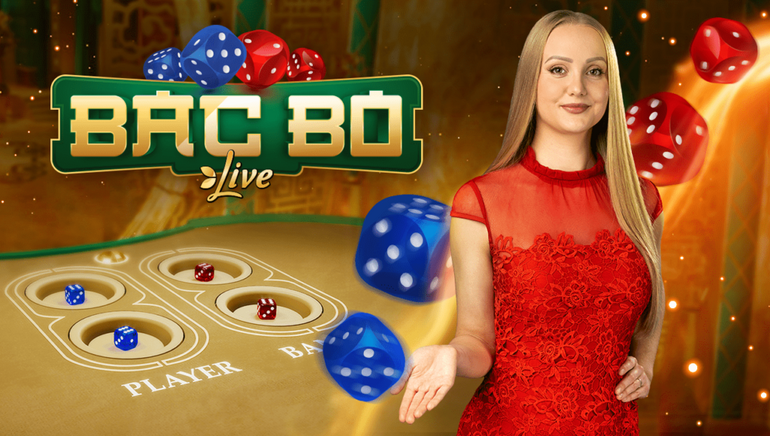 Baccarat is among the most popular card games and Evolution Gaming offers some of the best varieties. It appeals to both casual players and veterans because of its simplicity and high RTP. When betting on the banker the house edge shrinks to as little as 1.06% and the percentage is nearly as good at 1.24% for the player bet. Unlike blackjack, you don’t risk going bust and the game is fun to play against real dealers.

The goal is to make a game total as close as nine as possible and if the total exceeds this threshold, the digits in the “tens” column are ignored. The live casino specialist has announced a brand-new version of the popular game called Dice-Fused Baccarat. This is the perfect chance for players seeking big wins.

How to Play Bac BO at Evolution Gaming Casinos?

Players who are familiar with the classic version of baccarat will have no problem learning Bac Bo. Just as the name suggests, this version of the game also uses dice to turn the heat up a notch. Instead of a card shoe change and reset of the game history, players get the fast-paced and elegant gameplay. This baccarat version offers the same high return to the player as the classic but pays even better on ties. These were usually avoided by players because of the high house edge, but they now have a reason to bet on it.

Bac Bo will be available at live casinos powered by Evolution Gaming. Since this is the leading supplier of live dealer entertainment to online gambling operators, players will have the opportunity to try the dice fused game at top casinos. The addition of four dice is a factor of unpredictability but also increases the potential payouts. If you bet on a tie and strike it lucky, you will win the equivalent of 88 times the bet.

Dice Makes Everything Better in Baccarat

Evolution Gaming has created an original game based on a popular title, so its success is almost guaranteed. Bac Bo uses dice instead of cards and the score is made up of the sum of the two dice for the banker and two for the player. During the opening phase of the game, the four dice are set in motion and when they stop shaking, the result is unveiled. This is when the winner is decided, essentially the one that has the highest two-dice total.

The gameplay of Bac Bo helps it stand out from the crowd, but the game is also visually appealing. Developers decided to use an Asian-themed environment, to get players fully immersed in the original game atmosphere. Players will see their dice stop first, before the banker’s dice come into their final resting position. The party that has the highest score after the first dice shake will have the second dice stop next. Action peaks at the end of the third dice shake, as this is when punters know what number is needed last to win or score a tie.