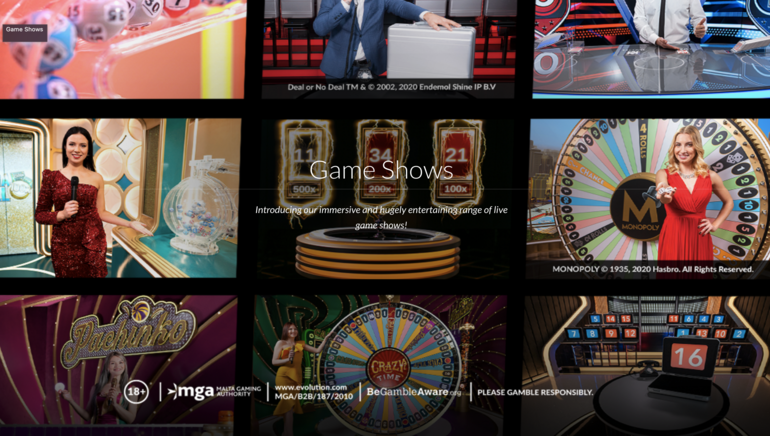 The invention of live game shows changed casinos forever. Instead of competing against a computer program, players were suddenly thrust into a series of exciting fantasy worlds. Evolution is the driving force behind this revolution, with games such as Dream Catcher, Crazy Time and Monopoly Live. They combine augmented reality, optical illusions and multipliers to create something entirely new. Learning how to play them will give you a new outlook on your favorite pastime.

Live Casino Game Shows - A Glimpse into the Future?

When it comes to inventions in the field of online casinos, live dealer tables are by far the most entertaining. And no company is more influential in this department than Evolution. Founded in 2006, they’ve released hundreds of titles you can enjoy from the comfort of your sala.

Sure, everyone loves a bit of blackjack, poker, or roulette, but Evolution has an even bigger Ace up its sleeve - live game shows. We’re going to look into this bongga new genre and see why experts believe it’s the next big thing.

In a vacuum, game shows are nothing new. For years, we’ve been enjoying the likes of Wowowee, It’s Showtime, and Game Ka Na Ba. However, Evolution was the first software supplier to ever think of connecting game show features with gambling.

That’s how Dream Catcher, the first of its kind, was born in 2017. It mesmerized players with its futuristic studio, realistic animations, and charming presenters. From that point onwards, the floodgates for live game shows were open.

Every live game show exists in a world of its own, with specific rules, perks, and features. However, you can expect to experience the following if you choose Evolution’s best titles:

All in all, the most important thing to do before you start playing is to learn all the rules. Unlike table games, live game shows can’t be accessed in Free Play mode. Therefore, you’ll be risking money from the get-go. To stay safe, pick a table with the lowest minimum bet and get a feel of how the whole thing works.

It’s been over half a decade since Dream Catcher was first introduced, and Evolution already has more than a dozen titles in its collection. However, it would be best if you focused on the best live game shows, ones that are both unique and exciting. According to both experts and players, these five titles fit the description:

We have to start with the first of them all. It just makes sense. Dream Catcher was the first live dealer game to introduce the money wheel.

Before each round begins, players bet on whether the wheel will stop at 1, 2, 5, 10, 20, or 40. The bigger the number, the bigger the payout, but 10s and above have much fewer slots. Two multiplier slots also exist, giving players a chance to boost their winnings 2x or 7x.

Many consider it a modification of Dream Catcher, but we’d say it takes the concept far beyond. The wheel is pretty much the same, with added spaces for 2 Rolls and 4 Rolls slots, both of which trigger the 3D bonus round.

When the round begins, the studio transforms into augmented reality (AR), where the iconic Monopoly Man throws a dice to determine the bonus prizes. Despite its two-phase design, Monopoly Live is very fast-paced.

Dream Catcher brought the wheel. Monopoly Live brought a bonus game. Crazy Time took the best of both shows and fused it into a bonanza of multipliers and prizes. The main game round begins with plates betting on 1, 2, 5, and 10, as well as four slots that trigger bonus games - Crazy Time, Pachinko, Coin Flip, and Cash Hunt.

If the pointer stops at one of these four slots, the scenery changes, and you have to make a random choice. Correct guesses often yield big multipliers, such as the maximum one of 10,000x in the Pachinko bonus game.

Join Gonzo, the ambitious Spanish explorer, on his mission to find the mythical city of El Dorado. It’s yet another first for Evolution, as there has never been a slot-game show hybrid.

The aim of the game is to find one of six differently colored stones on the stone wall behind the presenter. Once all bets are placed, the Prize Drop can begin. If you guess the position of one or more stones correctly, you get a payout. Re-drops, multipliers, and bonuses can increase the winnings up to 20,000x.

Deal or No Deal Live

Based upon the eponymous TV game show, Deal or No Deal Live pits the player against a set of 16 briefcases. It all begins with the qualifying round, where you need to spin a three-reel vault and align the gold slots. These spins predetermine the maximum payout in the main round, which is 75x-500x your bet.

Then, the Banker shows you the 16 briefcases. At this point, you get to pick which ones to open. Once you choose, the Banker will offer you guaranteed cash prizes. Sometimes, it’s to prevent you from winning the biggest prize, but it’s just a ruse in most cases.

These games may be popular, but that doesn’t mean you should pick just about any casino to play them. Sites like GCity Casino (G88) provide many added benefits, such as bonuses and around-the-clock support. Moreover, G88 Casino gives you peace of mind, knowing that a trusted regulator protects your funds and personal information during real money play.