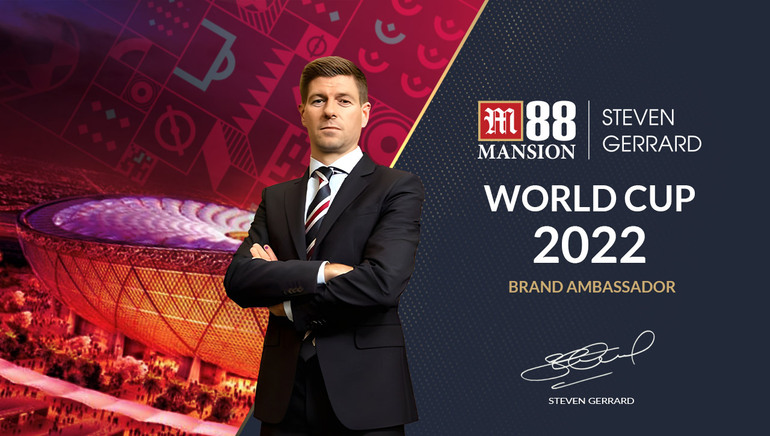 Steven George Gerrard (born May 30, 1980) is a legendary figure in the world of football. The former #8 player for Liverpool, and #4 for the England national team, Steven Gerrard, recently ended his tenure as coach of Aston Villa Football Club. M88 Mansion Casino has courted him as the official Qatar World Cup ambassador.

It's official,  legendary English footballer Steven Gerrard is the Qatar World Cup ambassador for M88 Mansion. As Asia's ranking online gaming platform, M88 Mansion will enjoy greater exposure, with Gerrard as the face of the brand.

The terms and conditions of the ambassadorship state that the former England footballer, club manager, and famed Liverpool midfielder will work closely with M88 Mansion. Gerrard will collaborate with M88 Mansion to promote the brand across Southeast Asia. In addition, Gerrard will conduct a series of online and promotional activities in the region.

As the face of M88 Mansion, Gerrard commented on his new role:

As M88 Mansion's brand ambassador for the World Cup, I am thrilled to be a part of it. I couldn't have been more excited to share my experiences on the field and my opinions with Asian sports fans about the forthcoming World Cup.

Alan Wafer, Head of Commercial at M88 Mansion, was equally thrilled that Steven Gerrard was chosen as the World Cup 2022 Brand Ambassador.

We are thrilled that Steven Gerrard has agreed to be our brand ambassador for the Qatar World Cup. It's an honour to include him in our expanding list of partners.

The legendary Steven Gerrard was a midfielder for Liverpool between 1988 and 2015. His illustrious career spanned 710 games. In that time, he amassed a fabulous 186 goals. Wearing the #8 shirt, Steven Gerrard featured 114 caps. During his tenure, Liverpool won 2 FA Cups, 3 League Cups, 1 Champions League, 1 UEFA Cup, 1 UEFA Super Cup, and 1 Community Shield.

Gerrard has been dubbed the quintessential footballer and the only player in the history of Liverpool to feature in the all-time top five for appearances and goals. His world-class ability is second to none, and his teammates and opponents revere him. He always gave 100% on the field of play and was ranked among one of the best midfielders.

Among his most notable achievements were his last-minute equalising goal against West Ham United during the FA Cup final and an impressive half-volley against Olympiacos that sent Liverpool through to European Cup glory. With 17 years behind him at Anfield, Steven Gerrard is quoted as saying - Cut my veins open, and I bleed Liverpool red. He grew up in awe of Liverpool and one day captained the side. At the end of his celebrated playing career, he was widely regarded as peerless. Now, he has a new challenge ahead as the official brand ambassador for M88 Mansion as part of the Qatar World Cup.