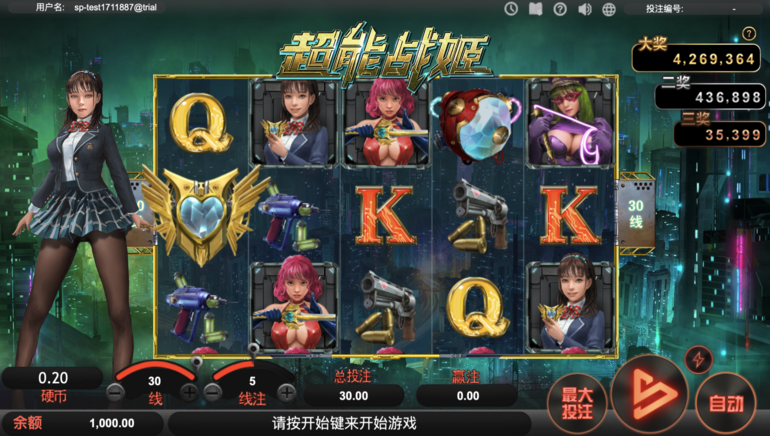 SimplePlay has expanded its portfolio with three more games, providing players with a chance to win big while spinning the reels of Super Fighting Ji, Phantom of the Dragon Queen and Chitose Phoenix.

SimplePlay’s already impressive portfolio of games just got better, with the addition of three more titles. Developed by talented artists for computers and mobile devices, these games have unique themes. Some are inspired by folklore, while others take their inspiration from modern themes, to appeal to the young audience. These installation-free games are just one click away, with great graphics and immersive game mechanics. There is more than meets the eye about them, as they all have a high return to player.

This modern slot with a 3x5-reel, 30-line structure takes players on a cool voyage into the future. When an evil lady threatens humanity, one schoolgirl with special powers is all that stands between the villain and the end of the world. The versatile character can quickly transform into a police officer, warrior or journalist in her quest to stop the evil lady into her tracks.

Punters appreciate the high return to player of more than 96% and the multiple winning combinations. Each spin of the reels can trigger the Power Spin Feature, Power Climb Feature and Power Prize Feature. They turn the heat up a notch by providing players with big profits as they fight side by side with the hero

Phantom of the Dragon Queen

The world of the Phantom of the Dragon Queen is in turmoil since the King was assassinated. The rightful heir is a fearless princess with the ability to tame dragons and bend them to her will. As the Dragon Queen surges to power, players can join her on her quest and win at big prizes in the process.

The game has five reels and 324 to 576 ways to win, with each of the three unique scenes having their own reel patterns. There’s no shortage of wild symbols either, with players stumbling upon the Extra Wild, Extra Reel Wild, and Bomb Wild. There is also a Free Game Feature, during which the Reel Extend Feature increases the number of real stops, while boosting the winning ways to up to 2000.

One of the most impressive slots from SimplePlay, Chitose Phoenix is dedicated to the mythical bird that could live eternally. Spinning the reels of this game with a 4x5-reel and 50 line structure also gives players the chance to win 1000 times the stakes. This happens when the Stack Top Pay Symbol appears on the reels, while the average return to player is 95.24%.

Chitose Phoenix gives players a lot of freedom of choice, which is self evident during the Free Game Feature. When this special round is activated, punters can choose one of the three options, where they can win between 4 and 10 free spins while discovering up to 188 Wilds. The medium volatility game is perfect for risk-averse punters who seek often winnings while enjoying an immersive video slot.