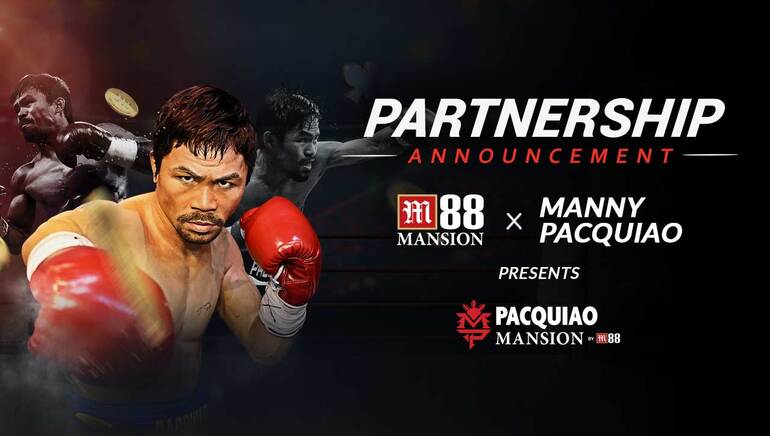 Manny Pacquiao is no stranger to the spotlight. This boxing champion was one of the world's most feared athletes in the ring and one of the sport's most respected ambassadors. This new partnership will see Manny Pacquiao featuring in live appearances and at multiple press conferences as the official M88 Mansion ambassador. In addition, Manny Pacquiao, the Filipino champion, will also engage in other activities, including exhibition matches and various pop-up activities throughout the region.

Manny Pacquiao was thrilled with the partnership agreement and shared his excitement to work with one of the most revered and celebrated online casinos in Asia, M88 Mansion. In Manny's words,

I could not be more thrilled to partner with M88 Mansion with a particular focus on sports. M88 Mansion has always amplified international sports events, and our partnership will surely take its approach to even greater heights. Our collaboration will offer massive promotions and much more," Pacquiao said. I am so excited to create new opportunities with M88 Mansion worldwide. I believe this partnership can deliver entertainment in the most powerful and imaginative ways.

The Head of Commercial at M88 Mansion, Alan Wafer, relayed his feelings about having The 8-Division World Champion as the official ambassador for M88 Mansion.

We are excited to have boxing legend and national icon Manny Pacquiao as the newest M88 Mansion Ambassador. Rest assured that M88 Mansion is fully committed to bringing quality products on par with the legendary boxer's status.

Details of the Partnership Between Manny Pacquiao & M88 Mansion

Pacquiao Mansion is a unique partnership built on solid foundations. This deal between these established brands has created an M88 Mansion Exclusive. This KO portal showcases a variety of MMA (mixed martial arts) events, basketball tournaments, boxing matches, and the like. These have been hand selected by none other than the people's champion himself – Manny Pacquiao. These special sporting events come with generous promotions, exciting bonuses, and unique offers.

Pacquiao Mansion also features sportsbooks from Saba Sports, Pinnacle, TF Gaming, and the champion's favourite pick – M88 Mansion games. With so many popular titles, including WWE Legends and Savage City, et al. M88 Mansion is bursting with excitement for online casino players. Additionally, players at M88 Mansion and fans of the people's champion, a.k.a. Manny Pacquiao, get behind-the-scenes access to unique video content about this Filipino pugilist's career and life in and out of the ring. He is regarded as the best Filipino pro boxer ever.

M88 Mansion is a pioneer in online gaming for Asia. It has become a regional business with well-established partnerships and associations worldwide. Since its inception in 2007, M88 Mansion has the largest and most diverse collection of live dealer casino games, table and casino slot games, and sports betting options. M88 Mansion employs over 2,000 folks to support more than 1M+ players across Southeast Asia. With world-class customer support and secure gaming, M88 is the best place to play online casino games in Asia.